Andres joined my Slim & Strong Metabolism program in November. He emailed me and said he needed to get his butt kicked hard because he was super out of shape. I promised him I’d do that for him (of course, it’s my job

Andres started coming to 3 Body Burn classes a week and worked hard to get stronger push ups, hold his planks longer, keep up with the cardio moves and plyometrics. At the end of the month he was a bit disappointed by his results. He had lost 2 lbs, but had gained a ton of stamina and strength. I suggested he’d clean up his diet more to see more fat loss as 80% of fat loss is the result of clean eating, not exercise alone. He was ready to work with me on his nutrition and sent me his food diary. It included granola, orange juice and milk for breakfast. Sure enough, that alone would make him hungrier the rest of the day and prevent his energy from being balanced. I suggested he switch to eggs, omelettes, egg sandwiches for breakfast, but Andres said he didn’t have time for that. I convinced him that getting up 5 or 10 minutes earlier to devote the time to eating a proper breakfast would pay off later on in the day. Not only would the 5 or 10 minutes of lost sleep pay off later on in the day with much better energy, but he’d also be a heck of a lot more productive if he ate better meals that gave him energy, instead of leaving him drained. He then decided to put the breakfast changes into action and sure enough, he was less hungry later on in the day, was able to stay up later without crashing and got more stuff done. Noticing the changes of just one meal made him excited about changing his lunch and dinner as well and sure enough it paid off.

The results of the December session were amazing. He lost 17 lbs in those 4 weeks and that during the most challenging time of the year – with holiday parties going on, booze and cookies everywhere! After the December session ended we discussed strategy for the weeks we were on break. He committed to continuing to work out in the gym with a routine I sent out and to keep an eye on his carb intake. When Andres returned this week, the whole class did a double take – 24 lbs lighter and his shirts are now just hanging off him. 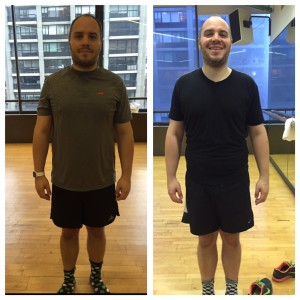 I asked Andres to write down the exact changes he implemented. Here it goes:

“This is a list of the changes I made:

Breakfast: I used to eat granola with milk and drink orange juice. Now I eat eggs with onions and tomatoes and sometimes a bit of mozzarella and whole wheat toast and tea.

Lunch: Instead of a wrap or sandwich, I became the salad expert. I usually add fish or turkey if I’m very hungry.

Snack and dessert: Greek yogurt with almonds, blueberries and blackberries

Dinner: Salad with fish or chicken. I eat out a lot and usually order fish with veggies.

I cut out all desserts and sweets. When I’m drinking with friends I try to stay with red wine.

Workouts: I stayed super active: 3 Body Burn classes a week with Ariane, biking and weights when possible. It goes without saying that I feel amazing with lots of energy and stamina.

And that’s it! Nice and easy! Maybe not that easy, but the mindset change that made the biggest difference was to stop ritualizing all eating moments. Before, my salad consumption was minimal to never and I realize that was one of the biggest changes. I used to tease Ariane that Green would be my middle name. Now it is.”

Andres made a few changes, but he made them consistently and he knew why he was making them. There was no guessing what would work. There was no trial and error. We pinpointed exactly what had to change and it paid off immediately. Congrats Andres! Rock on!